How to Improve Peptide Stability?

Many of the "tricks" used by chemists to enhance activity and stability, by protecting peptides against both endo- and exo-peptidases, can also be found in active peptides of microbial or marine origin: D-amino acids or unusual amino acids instead of the natural L-residues, cyclization, glycosylation, deamination, complete removal of the first residue, N-acylation or N-formylation at the N-terminus, amidation of the C-terminus, etc.

Peptide stability can be achieved by conjugation to a polymer. The most promising polymer is PEG, which shows little toxicity and is eliminated from the body intact. Polymer conjugation allows an increased peptide stability, and reduce elimination.

The introduction of D-amino acids in a sequence can give the peptide an increased stability, since only a few enzymes that effectively hydrolyse peptide bonds involving D-amino acids have been discovered and characterized in multicellular organisms. Moreover, D-residues often enforce a different conformation of the peptide, and strongly influence receptor affinity and selectivity.

N-alkylation (generally N-methylation) is present in a number of biologically active, natural peptides from different sources. Generally, peptides modified by the use of N-methyl amino acids

resulted in analogues with improved pharmacological properties and stability. The role of the position to be N-methylated for peptide protection from proteolysis is essential.

In these peptide-mimetics the normal sequence from N- to C terminus is reversed, and the natural L-amino acids are changed by D-amino acids. This reversal warrants that the side

chain topologies of the natural peptide and the peptidomimetic are the same. Peptide-bond reversal represents an important structural alteration for peptides, and proved to be useful to reduce the degradation rate of the peptides by peptidases. Retro-inverso peptides have found applications as immunogens, immunomodulators, immunostimulators; and as anti-inflammatory,

antimicrobial, and diagnostic reagents, as well as modified isomers of membrane-penetrating peptides as delivery systems.

In general, the cyclic analogues are much more stable with respect to the native peptides, conformationally more defined, and more selective towards the specific target. Different kinds of connections have been utilized to restraint peptide structure into a cyclic framework, including macrolactons, ether bridges, biaryl bridges, or by disulfide bridges or mimics, etc. 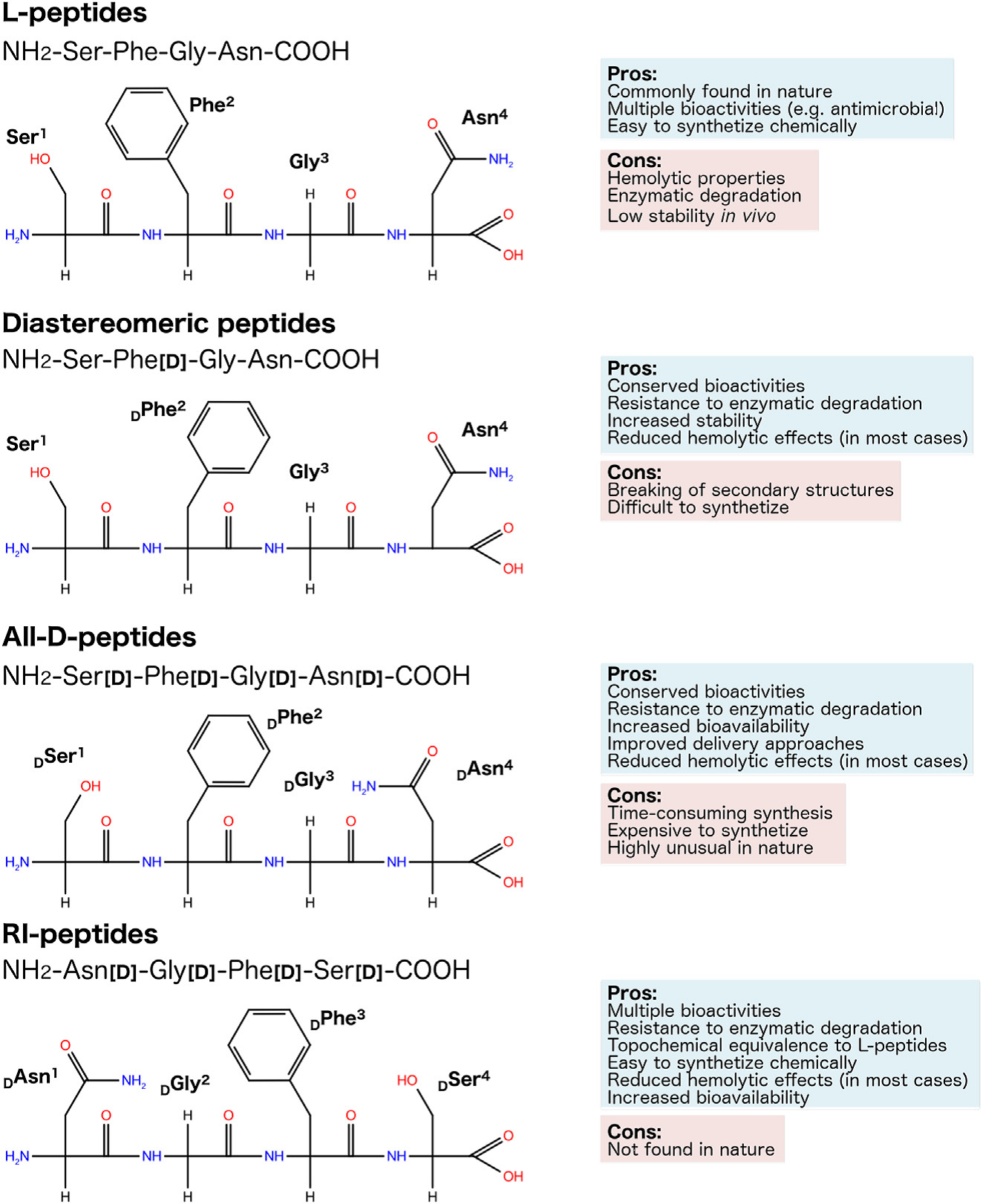 Representation of the planar structure and chirality of hypothetic L-, diastereomeric, all-D- and RI-peptides, also highlighting their pros and cons.